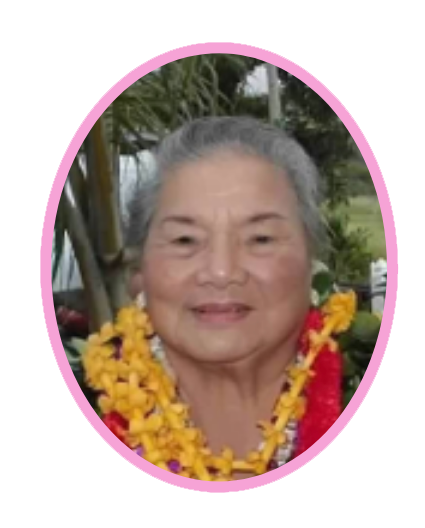 Filomina Atay, 88, of Kahului, Maui, Hawaii passed away peacefully on Thursday, March 5, 2020. She was born on February 8, 1932. Filomina was a devout Catholic from her “hanabuddah” days growing up in Paia and attending Holy Rosary Church. She gave much of her time by being active at Christ the King (CTK) Church in Kahului.  In 1992, she made her covenant with the Sisters of St. Joseph of Carondelet and was active with parish ministries such as Choir, Hospitality and Bereavement. Together with her husband, Donny, they started the CTK Food Pantry in 1994 from a Matson container to feed Maui’s needy which is still serving the community from a portable office at Christ the King Church.  As part of the Divine Will Prayer Group, she visited many of the religious sites in Europe with the highlight being at the Vatican as the audience with the late Pope John Paul II. Filomina also answered to “Fely” or “Naki”; however, she was best known not only by her family, but to others that she included into her ‘Ohana as “TUTU LADY”.  Tutu was the proud matriarch of the Atay ‘Ohana to her children: Don Atay, Donna Jones (Victor Regidor), Alika (Maile) Atay, Carlton “Boy” Atay, Denise Nishikawa and Cara (Russell) Burklin. Tutu Lady was predeceased by her husband of 65 years, Donny tay; her parents Agapito Bantilan and Gaudencia Olpoc Bantilan; sisters Mary Camacho and Rosalind “Inday” Kalalau; brothers Bill, Victor, and Martin Bantilan; hanai-daughter Victoria Bantilan Taylor; and grandson Po’ohala Atay. Tutu Lady is also survived by her brother–Alexander “Alex” Bantilan and William “Willie” Bantilan–and sister Loretta “Nani” Ridela.  She leaves behind 16 grandchildren–Kamoi (Alyson) Atay-Cooper, Shura “Alex” (Patience) Nishikawa, Travis (Caroline) Atay, Jason (Amanda) Nishikawa, Hoala (Jessica) Atay, Keola (Lena) Nishikawa, Kehau (George) Akau, Mahie (Jen Fordyce) Atay, Kainoa (Courtney Chargin) Duarte, Shauntay (Keoni) Duey, Kapuaimilia Atay, Chad (Chelsea) Taylor, Uakea Atay, Kalei Atay, Moani Atay and Matahi Atay–and 17 great-grandchildren–Connor, Alyssa, Casey, Phoenix, Kahoku, Lawai’a, Anuhea, Chloe, Lawakua, Puanani, Damien, Ellanikole, Ka’ipoleimanu, Ka’ieweakeola, Lilinoenani, Luna & Liloakahiwahiwa. Filomina was a 1950 graduate of Saint Anthony High School. Through her earlier years, she worked at the Hana Hotel, Maui Palms Hotel, Budget Rent-A-Car, and Sperry & Hanson Construction.  Fely was a dedicated full-time employee to Service Rentals & Supplies Inc. for over 47 years.  At age 88, she decided to semi-retire and go in twice a week. Funeral services will be held at Christ the King in Kahului at a later date. The Atay ‘Ohana would like to express their deepest appreciation for the outpouring of love and support.